Helping the Horde Get Animated!

There are now more than three hundred people on the Wall, zombie and trad alike. I had no idea that we would get so much support in such a short time.

I've been thinking about how I want to make Get Animated! more impactful this year; I think it will involve more than playing school sports and going to school dances. I want to initiate real change.

Can you tell I've been emailing Skip? That's why sort-of words like "impactful" start showing up in my vocabulary.
Posted by Tommy Williams at 10:18 AM 29 comments:

Labels: Get Animated, slydellco, Wall of the Dead

Faith and I went to the Haunted House on Christmas morning after exchanging presents. She bought me a nice pair of hiking boots and some other hiking gear and clothes; I went with an "all living" Christmas theme this year, giving her two potted plants, a cactus, and a hermit crab in a tank. Have you ever tried to wrap a cactus?

Karen and Margi made it over to the HH, but neither Adam or any of our other beating heart friends were able to come, which is too bad because we had a blast. The zombies had decorated a tree outside because they didn't want to cut one down for the inside. There were some decorations inside, and even Popeye got into the spirit by walking around wearing some ornaments. I won't tell you what he did with the hooks, though. Mal played Santa, wearing a hat and beard that Karen had picked up for him. Pretty much everyone from the HH community was there except for Tak.

The kids were pretty enthused about the gifts (no hovercraft as I mentioned, and we decided against the television and video games in the end), especially the art supplies. But you know what ended up being the hit gift of the whole event? Something that Karen (who swears she doesn't have a creative bone in her body) picked up: a spice rack.

Yes, a spice rack. The idea, she said, was that we could all use it to "practice" our sense of smell. How we're supposed to practice a sense I don't quite understand, but it was pretty interesting to everyone to discover that almost everyone could recognize cinnamon. I ended up being able to identify six of the seven spices on the rack, losing only to Karen, who edged me out of first place by correctly identifying turmeric. Turmeric? I don't think I could get that one right if I was alive, even.

"The sense of smell is our sense most connected with memory," Karen told everyone. This led to a number of people sharing cinnamon-infused memories of holiday's past, back when they were with their families, back when they were alive. It was a little nostalgic, a little sad, a little hilarious and mostly happy and heart-warming, the way all the best recollections are.

I thought I saw Tak drifting through the woods like a shadow when Faith and I were headed to the car to leave, but if it was him, he didn't answer when I called.
Posted by Tommy Williams at 2:50 PM 28 comments:

This is what we've been able to buy for the Haunted House zombies thus far:

two pencil sharpeners, a stapler, three pairs of scissors, one of them left handed

Two baseball gloves and a bat

The game of Life

The Dungeons and Dragons core rulebook set, with two sets of dice

A huge pile of clothes from Goodwill.

Many thanks to Phoebe and Margi for picking all this stuff up. We've still got some money left and the consensus seems to be more art supplies.

PS I was just kidding about the hovercraft
Posted by Tommy Williams at 1:08 PM 47 comments:

A). Everyone who is participating in the work study at the Hunter Foundation has offered to donate one weeks' pay to "the cause".

B). The Hunter Foundation is donating a Wii along with a few games--Rock Band, Tennis, and Bowling. There's some stuff they are asking us to do--they want us to keep track of progress in the games to see if playing has any effect on zombie motor control. I didn't have the heart to tell them we don't have a television at the Haunted House; maybe one will turn up.

C). I emailed Skip Slydell about what we were trying to do and he sent along (overnight!) a generous assortment of Slydellco. samples and products, including

Z, the body spray for the active Undead Male

Lady Z, (which, although there's no tag line, is presumably for the Active Undead Female)

and various shampoos, conditioners, and skin creams "specially formulated for active undead teens". There were also a few shirts and hats in the big box with some of his new designs. The one I liked most was a black shirt that says I Wasn't Finished in an elegant white Gothic script.

(All products trademarked by Slydellco.)

Things are shaping up for a festive holiday season at the HH. Let's hope nothing happens to wreck it all.
Posted by Tommy Williams at 8:31 AM 35 comments: 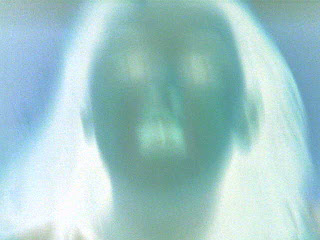 Zombies in the Mall

Went to the mall this weekend with Margi and Phoebe to do some holiday shopping. I wore a heaving coat, big scarf and big ski hat so that no one would see I was a zombie, not because I'm ashamed of who I am but because I really didn't anyone hassling the girls. I picked up a few presents for my Mom.

As we were walking around, Phoebe had the great idea of having a bunch of us chip in on little presents for the Haunted House gang, but we really didn't see anything that jumped out (we did see some plastic glow in the dark zombies, but they were really zombified, old school zombies and I don't think most of the kids would appreciate the irony).

We need some ideas. Were thinking small and relatively inexpensive. Can any of you help?
Posted by Tommy Williams at 3:53 PM 41 comments: