All Colette Wants for Christmas is...

Merry merry merry Christmas, everyone! I found Colette's very zombie Christmas list! It's pretty weird. She's been naughty all year so I don't think Santa will be delivering:

*A set of electric traaaaains

*Bread made of whole graaaaains

*A pair of Great Daaaaaaaanes

*A box of candy caaaaaanes

*An umbrella to stay dry when it raaaaaains

*Aspirin to cure all her paaaaains

*And of course, the thing a zombie like her needs the most, braaaaaaaains! Braaaaaaaains!

Hee Hee! She hates when I do that. Actually she wasn't naughty at all and so I bought her a scarf. A pink scarf and maybe she will let me borrow it.

And what did You get from the jolly old elf this year?
Posted by MargeeVee at 11:31 AM 36 comments: 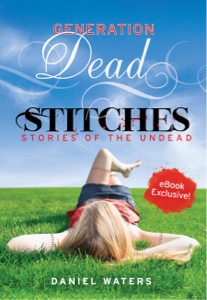 Watching television the other day with Colette because we are mad for Christmas specials. Rudolph, Frosty, Mr. Heat Miser, Abominable, and all of the other horrific Yuletide creatures. We were watching some festive show or other when, during a commercial break, we saw an advertisement for a video game filled with murder and face punching. Maybe there was a little mayhem, too. I don't really remember. Then there was another commercial for yet another video game.

This one was called Zombie Summer Camp.

The basic premise, or so I gathered, was that you are a ten year old kid named Jimmy who is sent away to Camp Attawaugan for summer vacation, and sometime during your first night away from home zombies invade the camp and start eating all the kids, some of whom return from the dead and try to eat you.

Onscreen we watched as Little Jimmy rammed a skewer with a flaming marshmallow on the end through the chest of an attacking zombie, driving the rotter back into the campfire.

I was about to make comment condemning the game when I realized that Colette was making that snorty snuffling noise that meant she was laughing.

"You think this is funny?

On screen, Jimmy was fending off three zombie cub scouts with a canoe paddle.

In the last sequence, Jimmy whipped a live squirrel at a dead camp counselor. We both started laughing then.

"He kills zombies? In the game?"

I giggled some more.

"That Popeye is a weird kid," I said.

Anyway, I thought those were strange commercials to run during children's holiday shows.

I changed the channel.
Posted by MargeeVee at 7:39 PM 7 comments: